Delighted to announce an ERC starter grant to develop a network theory of attitudes. Here’s the abstract:

Understanding the coordination of attitudes in societies is vitally important for many disciplines and global social challenges. Network opinion dynamics are poorly understood, especially in hybrid networks where automated (bot) agents seek to influence economic or political processes (e.g. USA: Trump vs Clinton; UK: Brexit). A dynamic fixing theory of attitudes is proposed, premised on three features of attitudes demonstrated in ethnomethodology and social psychology; that people: 1) simultaneously hold a repertoire of multiple (sometimes ambivalent) attitudes, 2) express attitudes to enact social identity; and 3) are accountable for attitude expression in interaction. It is proposed that interactions between agents generate symbolic links between attitudes with the emergent social-symbolic structure generating perceived ingroup similarity and outgroup difference in a multilayer network. Thus attitudes can become dynamically fixed when constellations of attitudes are locked-in to identities via multilayer networks of attitude agreement and disagreement; a process intensified by conflict, threat or zero-sum partisan processes (e.g. elections/referenda). Agent-based simulations will validate the theory and explore the hypothesized channels of bot influence. Network experiments with human and hybrid networks will test theoretically derived hypotheses. Observational network studies will assess model fit using historical Twitter data. Results will provide a social-psychological-network theory for attitude dynamics and vulnerability to computational propaganda in hybrid networks.

The theory will explain:

(a) when and how consensus can propagate rapidly through networks (since identity processes fix attitudes already contained within repertoires);

(b) limits of identity-related attitude propagation (since attitudes outside of repertoires will not be easily adopted); and

(c) how attitudes can often ‘roll back’ after events (since contextual changes ‘unfix’ attitudes).

The proposed project capitalizes on multi-disciplinary advances in attitudes, identity and network science to develop the theory of Dynamic Fixing of Attitudes In NETworks (DAFINET).

Specifically, DAFINET integrates advances in identity research from social psychology, models of attitudes from ethnomethodology (a branch of sociology), and multilayer network modelling from network science to propose a novel theory of opinion dynamics and social influence in networks. DAFINET will have impact in a broad range of disciplines where attitude propagation and social influence is of concern, including in economics, sociology, social psychology, marketing, political science, health behaviour, environmental science, and many others.

I’ve been asked by reviewers to stress test two networks following Jeong &  Barabási (2000). Critically the reviewers asked for an exploration of how network diameter changed as progressively larger numbers of nodes were randomly dropped from the networks.

Although the netboot library makes it trivial to do a case-drop bootstrap on a network, it reports a limited set of network statistics and diameter is not one of them.

Here’s an attempt to run a stress test on network diameter for a small (1000 node) randomly generated ring network. I’m sure there are more efficient ways of doing this, and I’m concerned that the algorithm might struggle with the large real-world networks I’ll be applying it to, but I’m proud of the pretty output for now:

This gives us this plot: 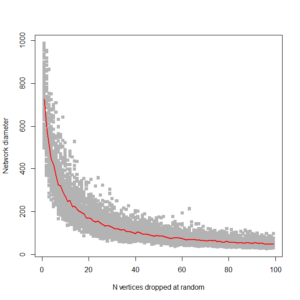 …. which is pretty much what I’m looking for.  It shows, as expected, that ring networks are highly vulnerable to node dropout. Compare to a 1000 node scale-free network: 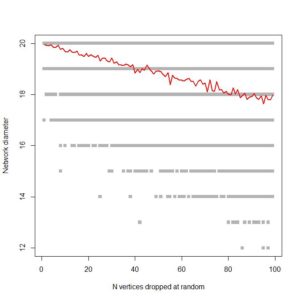 For as long as I’ve been doing qualitative analysis I’ve been looking for ways to automate transcription. When I was doing my masters I spent more time (fruitlessly) looking for technical solutions than actually doing transcription. Speech recognition has come a a long way since then; perhaps it’s time to try again?

I came across a blog post recently that suggested it’s becoming possible using the Google Speech API. This is the same deep-learning model that powers Android speech recognition, so it seems promising.

After setting up a GCloud account (currently with $300 free credit; not sure how long that will last) installing the R libraries and running some text is simple:

Once you’ve authorized with GCloud (a single line of code) the transcription itself requires a single command:

I tested it with a really challenging task: a 15 second clip of the Fermanagh Rose from the 2017 Rose of Tralee:

Then run the transcription:

Honestly, that’s not bad — although not quite useable. It’s certainly a good base to start transcribing from. I was not expecting it do deal so well with fast speech and regional dialects. Perhaps transcription nirvana will arrive soon; not quite here yet, but quite astonishing that such powerful  language processing is so easily accomplished.

Psychologists have exploited computers as metaphors for the human brain ever since their invention. Concepts like “short term memory” and “long term memory” as functional cognitive units that pass information from one to another owe their provenance to computer metaphors.

These metaphors, however, are based on particular technical instantiations of computing; there are unimaginably many ways to instantiate computers as technological objects, including in DNA, slime, and liquid crystal. Even the cloud based systems powering technology experiences today are radically different from the self-contained computing units that spawned the computer-based metaphors at the heart of cognitive psychology. For example,  web-pages hardly ever exist on a single server anymore. When called they are constructed on-the-fly from databases and servers with the illusion of being a unitary object. This very webpage was constructed with 93 calls to four domains; each of those calls would have been served by a server accessing multiple databases in order to fulfill the request. A simple blog page is constructed on-the-fly by literally hundreds of processes hosted on multiple servers.

The information-processing metaphor of the human brain is based on the standalone serial computer; and in practice those barely exist anymore. New forms of computing, like “cloud-computing”, radically disrupt these metaphors.

pingfs (ping file system) is a file storage  system that stores data in the internet itself, as packets bouncing between routers in a network. As a  packet is received it is bounced back as a new packet. No local storage exists beyond that required to read the message, bounce it and instantaneously delete the local copy. The data is “stored” primarily between nodes, not within them; like storing tennis balls by juggling them.

This seems like a far better metaphor for memory than the “short term memory”[RAM]/”long term memory”[Hard-drive] distinction. It captures the social nature of memory, and how individuals primarily remember things they are reminded of.

But as a metaphor for social life and memory it could be improved. What if  nodes in the network selectively bounced packets based on agreement and disagreement? What if packets were subtly changed each time they bounced? This would start to approximate a metaphor for culture, and capture how information is simultaneously transmitted and stored; that the act of transmission is also a mechanism of storage.

This metaphor starts to capture some of the magic of cultural memory; moving the locus of action from the inside of individual brains to the spaces between people, as post-structural theorists have long suggested.  Culture, according to this metaphor, is produced and maintained by the constant flurry of interaction between its members. It is what happens between people, not within people, that creates memory.  Obviously, this is only possible if the people have the capacity to “bounce packets” of information in appropriate ways, but it is a metaphor that highlights that meaning and memory cannot be made alone.

In social psychology we’re interested in how group identity and group processes impact on individual experience and behaviour. Until now the field has focused largely on how people perceive groups and identity; and has not worried too much about the structure of social connections. Network structure , however, makes a big difference to social outcomes at collective levels and we’re now getting tools and models to start to make sense of it all.

Allen and colleagues (2017) have recently shown that cooperation is more likely to emerge in networks with fewer but stronger ties at local levels than in networks with more (but weaker) connections. This is theoretically exciting, as it shows that it is possible and fruitful to analyze social psychological constructs in relation to network structure.

It’s also deeply concerning, since the digital platforms that mediate more and more of our social relationships (Twitter; Facebook; Instagram) are cultivating social networks with large numbers of weak ties — exactly the kinds of relationships that, according to Allen et al., will result in less cooperative networks at large scales.

Counterintuitively, if we want more cooperative societies we might need to spend less time on our phones and see fewer people more often.

This is a very exciting find: a way to automatically generate a publications page on a WordPress blog from a bibtex file.

I’ve used Jabref to manage my own publication record for years now. Papercite pulls the most recent version of the Jabref database (a bibtex file) via a Dropbox link and automatically generates my publication page (see it in action here).  Here’s the script in the WordPress page that does the work:

Now, when I update my bibtex record with new publications (which I would be doing anyway) my publications page automatically shows the most recent updates.

Fingers-crossed that this continues to work when Dropbox changes its web-rendering policy in September….

I’m excited to be travelling to South Africa for the VIAPPL symposium at the first Pan-African Psychology Union Congress in Durban on the 19th of September.

What I write and think about:

• the development of a new Virtual Interaction APPlication (VIAPPL) that allows experiments in a context that allows interaction and social network analysis of emergent relationships. See www.viappl.org

• qualitative exploration of how men and women construct gender identities in “critical moments” of their lives such as dates, weddings, job interviews, having children and retiring.

• identity and stigma in health interventions.

All claims & opinions on this website are my own.